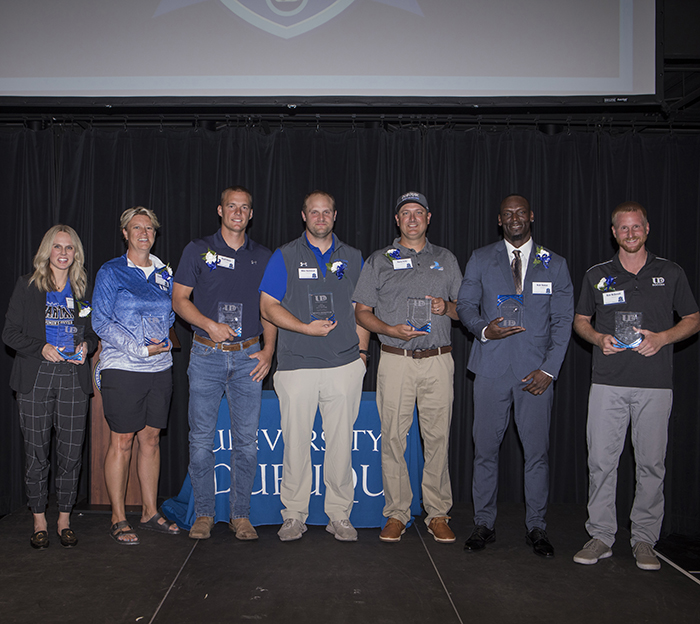 DUBUQUE, Iowa - The University of Dubuque welcomed the 2022 Athletic Hall of Fame Induction Class on Saturday, Sept. 10, 2022, in Babka Theatre, Heritage Center. Honorees were recognized during halftime of the football game against University of Wisconsin-La Crosse.

Since 1989, the UD Athletic Hall of Fame has honored a select number of former student-athletes for their outstanding individual contributions to UD's athletic programs.

Jennifer Corwin (C'99)
Corwin, who lives in of Huntley, Illinois, graduated from the University of Dubuque in 1999 with a degree in physical education and health. She found success in multiple sports while at UD. Corwin was a four-year member in volleyball and basketball from 1994 to 1999. She also was a member of the softball team where she earned All-Region recognition in 1997.

After graduation, Corwin taught at LaSalle-Peru Township High School from 1999 to 2005. She currently teaches at Harlem High School in Machesney Park, Illinois. Corwin has used her expertise to help young students and athletes while coaching volleyball, basketball, and softball. As the head coach of the Harlem High School softball team, she led her team to two conference championships and two regionals. Corwin was the Coach of the Year for the NIC 10 Conference in 2008.

Aside from coaching, Corwin also has an impressive teaching career as she was the Physical Education Division Chair for nine years, was an Auxiliary Member of the American Legion, and has received her master's in teaching and leadership from Saint Xavier University.

Randy Hefel (C'98)
Hefel, who lives in Dubuque, graduated from the University of Dubuque in 1998 with a degree in special administration and business administration. He made a name for himself on the baseball field. During his baseball career at UD, Hefel earned All-Conference recognition two times and also earned All Region.

Hefel's commitment to baseball has continued throughout his adult life. For the past 12 years, he has coached youth baseball and softball in Dubuque, and he loves sharing his passion for the sport with young athletes.

After graduation, Hefel married his wife, Erin. They have two children together, Lauren (16) and Evan (13). Currently, Hefel is a CNC technician for Nordstrom Visual Production in Dubuque.

Miles Hookstead (C'13)
Hookstead, who lives in Dubuque, graduated from the University of Dubuque in 2013 with a degree in health, wellness, and recreation. He was a two-sport athlete, participating in football and basketball throughout his college career. On the field, he earned All-Conference and All-Region as well as two-time All-American honors. Hookstead was also a member of the 2011 Conference Championship Team. Additionally, in men's basketball, he was a starter on the 2013 IIAC Tournament Championship Team.

Immediately after graduation, Hookstead became a coach at his alma mater. He helped coach the Spartans to a 2015 Football Conference Championship.

Hookstead continues to coach at UD. He and his wife, Kelsey, were married in 2017. They have two sons, Wesley (2) and Kameron (8 months).

Nick McDonald (C'13)
McDonald, who lives in Carpentersville, Illinois, graduated from the University of Dubuque in 2013 with a degree in health, wellness, and recreation. He found success on the soccer field and still holds the school record for single season points (49). McDonald's honors include four-time All-Conference, three-time All-Region, and All-American. He was also a member of the 2010 Conference Championship Team.

After graduation, McDonald was a manager at Target and coached soccer for the Dubuque Soccer Club. In 2021, McDonald moved back to his home state of Illinois and began working at Bankers Life Insurance in Schaumburg, Illinois. McDonald and his fiance, Taylor, have a baby girl, Bria Rae (11 months).

Sara (Fassbinder) Salter (C'11)
Salter, who lives in Scottsdale, Arizona, graduated from the University of Dubuque in 2011 with a bachelor of science in nursing. She played women's soccer all three years while attending UD. During her soccer career, Salter earned All-Conference in 2009 and 2010. In 2009, she was named IIAC MVP. She also served as the captain of the 2009 IIAC Tournament Champion Team.

After graduation, Salter began her nursing career at Community Hospital in Munster, Indiana. Since then, she has worked on many different units including telemetry, intensive care unit, and post-anesthesia care unit in Indiana, California, and Arizona. Sara and her husband, Ryan, were married in 2018. Currently, Salter enjoys being a stay-at-home mom to their young children, Rowan (3), Remi (2), and Reece (11 weeks), and their goldendoodle, Winston.

Nick Thomas (C'07)
Thomas, who lives in Buford, Georgia, was a member of the Class of 2007 at the University of Dubuque, studying health, wellness, and recreation. During his college career, he was a key member of the basketball team. Thomas earned All-Conference honors three times and All-Region honors. He currently holds the school record in single-season steals (70).

After his time at UD, Thomas started a basketball college recruitment program called Fundamental Basketball Academy. The goal of this program is to help students improve their basketball skills leading them to college opportunities. To date the program has helped over 20 students receive various scholarships and financial assistance to attend college.

Currently, Thomas is a personal trainer, actor, and model in both Los Angeles, California, and Atlanta, Georgia. He has been featured in the Lifetime movie called Line Sisters, in Krave Magazine in 2015, and, most recently, the July 2022 edition of the magazine True Self.