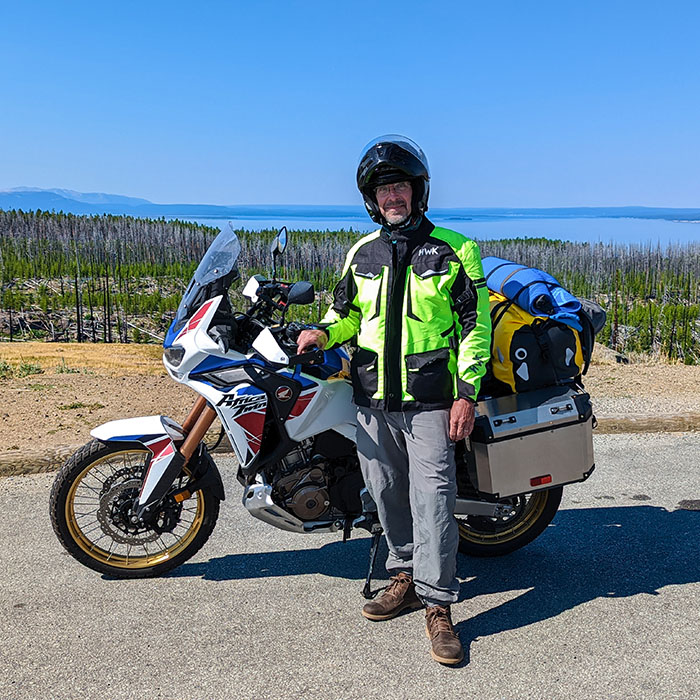 "I will be 63 on my next birthday, the same age at which my father died. This past year, I've struggled with arthritis in my hip, my younger daughter graduated from college, my older daughter got married, and my dog died. There's a horizon I haven't been able to see beyond, but I don't want to approach it sitting on the couch drifting into senility. I decided to revisit some of the places that first drew me into geology - the Badlands, Yellowstone, and the Tetons. I wanted to see how they had changed and better understand how I had."

You plan to write a book on climate change patterned after Robert Pirsig's Zen and the Art of Motorcycle Maintenance, John Steinbeck's Travels with Charley, and William Least Heat-Moon's Blue Highways. Why did you choose this form of storytelling to share your research?

"I first started using storytelling in my geology courses as a way of both making scientific concepts more understandable for my students and helping the UD students that we intentionally recruit see that I, too, was a first-generation student. Over the years, I developed a book based on those stories that I use for my course, which I give in PDF form for free to my students, and I've seen some of them connect in ways that weren't expected. Humans love stories, and the vulnerability that is part of a good story breaks down barriers that politics and prejudice put up. We don't lack climate-change data. We lack love for each other and the natural world. Stories help us to open ourselves up to each other. Only then can the data help inform our decisions."

What are some of the top moments that stood out to you during your motorcycle trip?

"Emily Blue in the University of Dubuque Theological Seminary speaks of 'God moments' - those times when things seem to align in ways that seem improbable. I had a lot of those on the trip, moments where I had to confront my own biases. For example, I was in a campground bathroom in West Yellowstone chatting with a guy at the sink next to me. He had a big belly, a gray ponytail, and was a Harley rider who had just come from Sturgis, the big motorcycle rally in South Dakota. Afterward, I went to a hut in the middle of the campground that sold coffee, bought some and a muffin, and sat down at a picnic table to journal. The guy came over and joined me. It turned out that he was a PhD from Florida that works on space launches for NASA. He has a drum studio in his basement. His wife is a suicidal invalid, so he only leaves her once a year to come out West to meet up with his brother to go motorcycle riding. To say that my initial stereotype of him was wrong would be an understatement. I was humbled."

What were some of the obstacles you had to overcome?

"There were two big obstacles. In January 2022, I was diagnosed with arthritis in my hip. I doubted I could throw my leg over the motorcycle. My doctor's first comment was about the possibility of hip surgery. Instead, I joined the Dubuque Community YMCA/YWCA and went for professional help. I didn't know if I would be able physically to go on the trip, but I kept working at it - stretches, exercises, and walking. I got a lot better - I did a 10-mile hike in Glacier National Park! The second concern was with my motorcycle. I had purchased a Honda Africa Twin Adventure Bike, a lovely bike with a DCT transmission, grip-warmers, and cruise control that made the many miles a lot easier. But it was taller and heavier than any I had owned previously. And I had dropped it multiple times, always at slow speeds. I practiced slow-speed maneuvers in a parking lot many days before the trip, but I was still anxious. Then I dropped it twice on the trip, both times within a few feet of where I'd camped, starting out on bumpy gravel. A blow to my confidence and pride. But I kept learning and mostly mastered it. And I was glad for the additional weight when I hit 60 plus mph crosswinds coming back across Wyoming on I-80."

How do you plan to incorporate the lessons you've learned from your research into the classroom when you return from your sabbatical?

"My students have heard my stories, and they've seen me cry. That won't change. But with the new stories, what I hope they see will be an inspiration to 'carpe diem,' to seize the day. I'll use examples from the changes in Yellowstone and the Badlands, but the main point is that if you love something, you'll want to preserve it. And there is a lot to love."