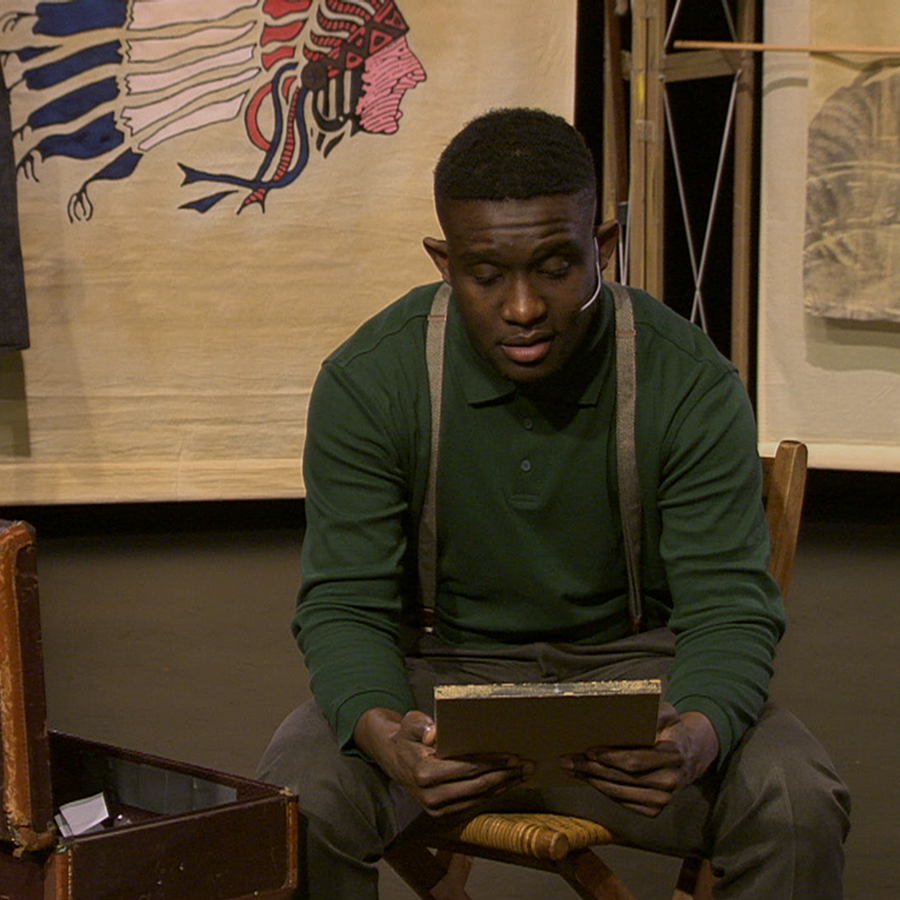 Wings of Courage is also available for viewing via paid stream from Tuesday, Oct. 19, through Friday, Nov. 19, 2021. Purchase virtual tickets at www.dbq.edu/HeritageCenter.

Wings of Courage is a two-man original play from Mad River Theater Works with music that tells the remarkable story of the first African American to fly a plane in combat. Set in the early 20th century in the years leading up to World War I, this one-act drama explores the unbelievable life of Eugene Bullard, a professional boxer, World War I flying ace, jazz musician, and spy. The color of Bullard's skin prevented him from taking his place alongside other American heroes of his day, but that did not stop him. Wings of Courage shows how Bullard's determination and perseverance helped him overcome discrimination throughout his life. It is an uplifting tale of vision and hope.

MadRiver Theater Works is an acclaimed touring ensemble that creates vibrant and evocative plays with music for families and young audiences based on American history and folklore.

Robert F. Jefferson Jr., an authority on African American history, will follow Wings of Courage with a virtual, live presentation on the African American military experience and conduct a Q&A with the audience. Jefferson is an associate professor of history at the University of New Mexico where he teaches US and African American history. His research interests include the African American military experience, the civil rights movement, Black Western history, and disability studies. He is the author of Fighting for Hope: African American Troops of the 93rd Infantry Division in World War II and Postwar America, Brothers in Valor: Battlefield Stories of the 89 African Americans Awarded the Medal of Honor, and Black Veterans, Politics and Civil Rights in the Twentieth-Centry America: Closing Ranks. Jefferson is presently at work on The Color of Disability: The Many Lives of Vasco de Gama Hale in Twentieth-Century America and When Jim Crow Faced a New Army: World War Two and the Non-Segregation of the United States Military.

Wings of Courage is one of numerous events included in UD's new months-long Captain Robert L. Martin Black Heritage Tribute. Support for this presentation has been provided by the City of Dubuque Arts and Culture Special Projects grant program with additional assistance from the William P. Woodward Visiting-Artist-in-Residence Endowment.

Broadcast media support for this event is provided exclusively by Radio Dubuque and its four affiliate stations.

Tickets for the Wings of Courage Play Screening with Guest Speaker Robert F. Jefferson Jr. can be purchased from 10:00 a.m. to 5:00 p.m. Monday through Friday and 90 minutes prior to events at the Farber Box Office, Heritage Center, University of Dubuque, 2255 Bennett Street; by phone at 563.585.SHOW; or online at www.dbq.edu/HeritageCenter.

Wings of Courage can be added to a series ticket package at a discount. Patrons may choose four to seven additional fall semester events to customize a series ticket package at a discount between five to 20 percent. Other subscriber benefits include discounted companion tickets, priority seating, reduced fees, and payment plan options. Order forms are available online at www.dbq.edu/HeritageCenter and the Farber Box Office.