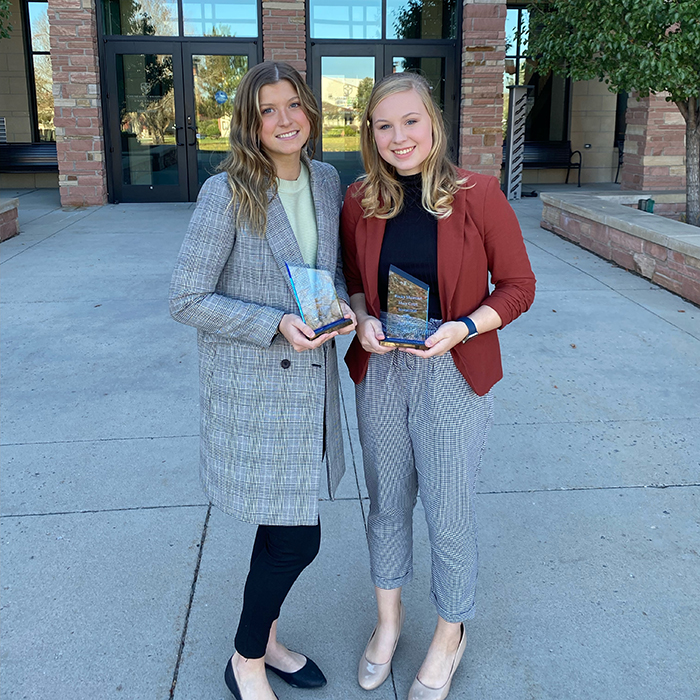 The competition featured over 20 teams. The UD team of Cashman, a sophomore criminal justice and sociology double major from Fort Madison, Iowa, and Wille, a senior criminal justice major from Elkader, Iowa, made it to the finals before placing second. They were coached by Ben Bartels, JD.

"My experience at the invitational was phenomenal. Being able to make it to the finals was nerve-racking but such a great opportunity for growth. I'm glad to have had the experience to better prepare for regionals," Cashman said.

Wille shared it was "extremely exciting" to earn second place at their first competition.

"Although we held ourselves to a high expectation, we walked into the competition just wanting to improve for regionals," she said, adding, "This second-place win feels more like a group accomplishment rather than just an award for my partner and myself. While in Colorado, we had the help of a veteran team, Sydni Kirk and Jerry Jones. Without their help of preparing us for the intensity of the second day, we may have been blindsided. While competing in the final round, they sat in the room to provide familiar faces to bring comfort to Kylee and I. Both Sydni and Jerry, along with our coach Ben Bartels, provided us with the confidence we needed to be successful."

The American Moot Court Association's South Central Regional will be held Friday, November 18, 2022, and Saturday, November 19, 2022, at Texas Tech Law School in Lubbock, Texas. Two UD teams will compete at the tournament: Cashman and Wille as well as Kirk, a senior criminal justice major from Dubuque, and Jones, a junior criminal justice major from Janesville, Wisconsin.

Moot court allows undergraduate students to engage in simulated legal arguments before a hypothetical appellate court reviewing a fictitious case. At the Rocky Mountain Moot Court Invitational, the case that Cashman and Wille argued dealt with whether technology used by law enforcement infringed upon the petitioner's Fourth Amendment right as well as whether the sentence imposed on the petitioner violated his Eighth Amendment rights.

"I have learned from my time in moot court that confidence in yourself is important in regards to success. Going up against schools that have been doing this much longer is intimidating, but believing you are just as capable can help with some of the nerves. I have also learned that having a strong support system, and a group of colleagues, is necessary for success. Without the help of everyone in the pre-law program, achievements like this wouldn't be possible," Wille said.