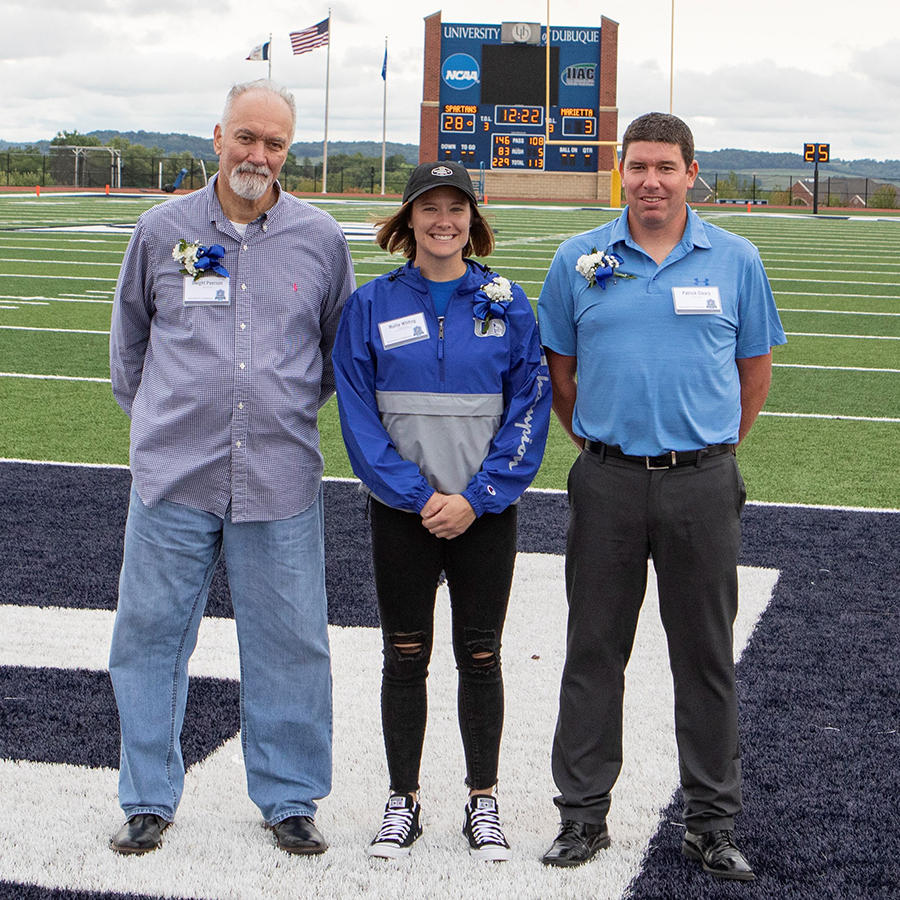 DUBUQUE, Iowa - The University of Dubuque welcomed six accomplished former student-athletes and the 1959-1962 men's tennis teams into the UD Athletic Hall of Fame on Saturday, September 4, 2021. Honorees were recognized during halftime of the football game against Marietta College.

Since 1989, the UD Athletic Hall of Fame has honored former student-athletes, coaches, and supporters who have contributed to the success of UD.

After graduating, Patrick continued his passion for running through coaching students at middle and high school levels. He has coached multiple teams and individuals who went on to have success at the Wisconsin State Championship.

Patrick currently works in the School District of Monroe where he teaches as well as coaches basketball, track, and cross country. In his spare time, he enjoys spending time with his wife, Briana, and watching his daughters, Braylin and Elyse, participate in dancing, swimming, running, softball, and playing piano.

Wyatt Hanus (C'13)
Hanus graduated from the University of Dubuque in 2013 with a degree in accounting and business administration. During his college career, he participated in football from 2009 to 2013 and men's basketball from 2009 to 2012. Wyatt was a three-year starter on the football team and served as captain during 2011 and 2012, leading the Spartans to their first Iowa Intercollegiate Athletic Conference title in 31 years. He graduated holding two Iowa Intercollegiate Athletic Conference records - touchdown passes in a single conference game (7 vs. Buena Vista, Oct. 22, 2011) and touchdown passes in an IIAC season (35).

Immediately following graduation, Hanus was invited by the NFL's Minnesota Vikings to participate in their annual rookie mini-camp on a tryout basis. In June 2019, he married his college sweetheart, Brittany Gabrelcik (C'14, MBA'16), and the couple welcomed their first child in September 2021. Hanus is currently working in property management for his family business and helps with the family farm.

Dwight Peerson (C'81)
Peerson studied at the University of Dubuque from 1976 to 1979, with a focus on coaching. During his time at UD, Peerson served as the defensive co-captain of the football team. Peerson led the 1979 football team to an Iowa Intercollegiate Conference championship, and he was named most valuable Defensive Back/Linebacker.

In 1980, Peerson served as a UD linebacker coach under Coach Carthel and Coach Birmingham. He then went on to play for the Chicago Lions semi-pro football team.

After playing football, Peerson went to work for the Port of Houston and the Global Marine Drilling Company before transitioning careers to Continental Airlines. Continental Airlines eventually merged with United Airlines, where Peerson is currently employed as a board lead. Peerson and his wife, Susan, have been married for 32 years and are very proud of their children, Cole, Catherine, and Christian. To stay involved with football, Peerson enjoyed coaching his kid's flag football teams.

Daunta Peterson (C'06)
Peterson graduated from the University of Dubuque in 2006 with a degree in health, wellness, and recreation. He found success in multiple sports while at UD. While competing in track and field, Peterson took first place in the Iowa Intercollegiate Athletic Conference (IIAC) in both 55 meter dash race and the 4x100 relay race. As captain of the football team, Peterson was named Most Valuable Offensive Player twice.

After graduating, Peterson signed as an undrafted free agent with the Buffalo Bills for a season. Peterson would continue his football career, playing in the NFL Europe League for the Rhein Fire. In 2017, Peterson coached the seventh grade Football University national championship team. He has started his own nonprofit organization, The Kumlawdi Foundation, which provides mentoring programs for school age youth in the Tampa Bay Area. Peterson also enjoys giving back to the community he grew up in, while raising his five amazing kids, Aniya, Daunta Jr., Chase, Jade, and Zuri, with his wife, Shanay.

Mollie Whiting (C'13, MBA'15)
Whiting graduated from the University of Dubuque with a degree in health, wellness, and recreation in 2013. She played women's basketball all four years while attending UD. Whiting currently holds the record for all-time leading scorer for the University of Dubuque women's basketball team. She also holds the American Rivers Conference record for scoring 41 points in a tournament game. After leading Division-III with 667 points and leading the Iowa Intercollegiate Athletic Conference averaging 27 points per game, Whiting was named All-IIAC 1st team. For her efforts during the 2012-2013 season, she was named Honorable Mention All-American, 1st Team All West Region, and the University of Dubuque Athlete of the Year.

Whiting currently works at Northwestern Medicine Hospital in Johnsburg, Illinois, where she lives with her girlfriend, Brittney, and pet Rottweiler, Stella.

Orlando Walton (C'08)
Walton graduated from the University of Dubuque in 2008 with a degree in computer information systems. He was a two sport athlete while attending UD, participating in both football and track and field. Walton's football highlights include catching three interceptions in one game and being named 2nd Team All-Conference. Walton broke the conference record in the 100 and 200 meter dash and became a four time NCAA All-American in track and field. For his efforts, Walton was named the 2007 Iowa Intercollegiate Athletic Conference Most Valuable Player for track and field.

After graduating from UD, Walton obtained his master of business administration from Strayer University. Walton is grateful for the memories he created with his teammates and coaches while playing sports at UD. He is currently the team lead at Cerrowire in Madison, Alabama, where he resides with his wife, Rocky, and children, Orlando II and London.