The Legendary Count Basie Orchestra to Perform at Heritage Center 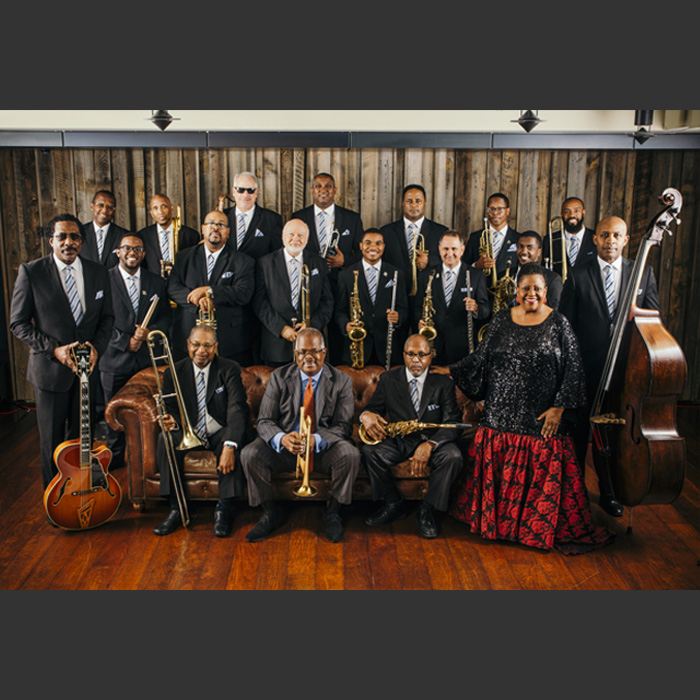 Nearly 30 years after his passing, pianist and bandleader William James "Count" Basie is an American institution that personifies the grandeur and excellence of jazz. Count Basie is the only bandleader in the history of jazz to have his orchestra still performing sold out concerts internationally. During their record-breaking tenure, the Count Basie Orchestra has scored 18 Grammy Awards, performed for royalty, and has featured some of the greatest soloists in music history. Rapidly-paced fanfare filled with groove and Louisiana-inspired dirty trombone licks make this lively performance a momentous and rare treat for audiences of all ages.

Guest Vocalist Carmen Bradford is a 2022 Grammy nominee and recipient of the Los Angeles Jazz Society's Jazz Vocalist Award. She grew up with music in her home and in her heart. It was only natural that Bradford would follow in the footsteps of her great family legacy being the daughter of legendary cornetist/composer Bobby Bradford and world-renown jazz vocalist/composer/author Melba Joyce.

At the age of 22, Bradford was discovered and hired by Count Basie and was the featured vocalist in the Legendary Count Basie Orchestra for nine years. Even after all these years, Bradford still performs with what she calls her Basie Family. She has never forgotten Count Basie, who opened the door and gave her wings. Bradford has performed on multiple albums with the Legendary Count Basie Orchestra, including two Grammy Award-winning albums in the 1980s as well as the Grammy-nominated release of Live At Birdland in 2022.

Bradford's soulful voice warmed the hearts of the world through the celebrated performance of the classic duet, "How Do You Keep the Music Playing," on The Tonight Show with Johnny Carson in 1991. Over the years, she has performed with countless artists around the world including Wynton Marsalis, Shelly Berg, Jeremy Monteiro, John Clayton, Nancy Wilson, Lena Horne, Doc Severinsen, Tony Bennett, James Brown, Willie Nelson, Tierney Sutton, Liz Wright, Patti Austin, and more.

A free pre-show reception for "International Photography Exhibit: Photos by University of Dubuque Students" will be held from 6:30 to 8:00 p.m. in the Bisignano Art Gallery, Heritage Center. The exhibit will be open Wednesday, February 1, 2023, through Friday, February 24, 2023.

This engagement is supported by the City of Dubuque Government Alliance on Race and Equality (GARE) re-granting program.

Tickets for The Legendary Count Basie Orchestra directed by Scotty Barnhart with Guest Vocalist Carmen Bradford can be purchased from 11:00 a.m. to 2:00 p.m. Monday through Friday and 90 minutes prior to events at the Farber Box Office, Heritage Center, University of Dubuque, 2255 Bennett Street; by calling 563.585.SHOW; or by visiting www.dbq.edu/HeritageCenter.

New this season, H-PALS allows people to earn a point for every dollar spent. When patrons reach 200 points, they receive one free ticket (valued up to $50) for an eligible event of their choice.