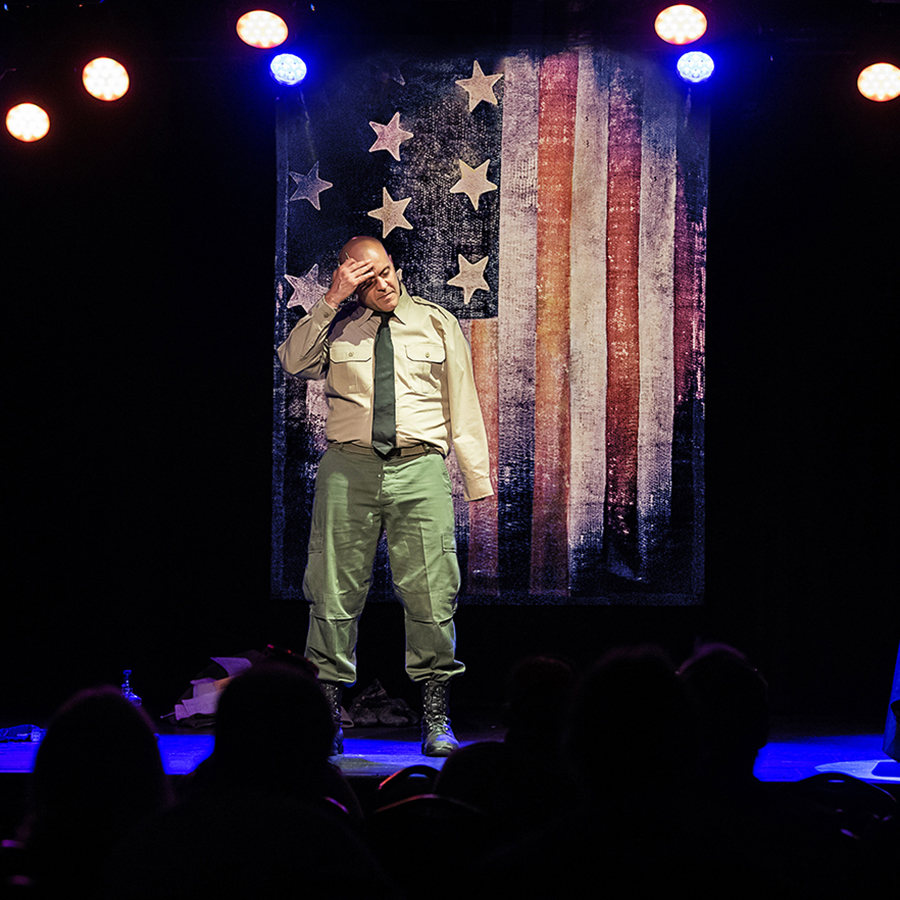 DUBUQUE, Iowa - A powerful one-man show that examines the sacrifices made by American soldiers and their families will come to the ninth annual Live at Heritage Center Performing Arts Series next month. The American Soldier Solo Show will be held at 7:30 p.m. Thursday, Nov. 11, 2021, in John and Alice Butler Hall, Heritage Center at the University of Dubuque.

Douglas Taurel's The American Soldier Solo Show is a mosaic of narratives based on and inspired by real stories and letters written by veterans and their families from the American Revolution, the Civil War, WWI, WWII, the Vietnam War, and the conflicts in Iraq and Afghanistan. In this one-man show, Taurel will perform as men, women, children, African Americans, Southerners, Northerners, and Hispanics to reveal the struggles American soldiers face at war and their internal struggles to return home. This tapestry of different influences of race, nationality, and ethnicity is what makes this show captivating. It is what The American Soldier Solo Show is about - the human story. The show's goal is to honor our veterans and say thank you to their families for their immense sacrifices to our country.

The American Soldier has been nominated for an Amnesty International Award and received four stars at the Edinburgh Festival Fringe. It has been performed at the Kennedy Center, Off Broadway, the Library of Congress, The American Legion's National Headquarters, and New York Federal Reserve Bank.

Taurel's television and film credits include Mr. Robot, The Americans, Blue Bloods, Persons of Interest, The Following, Damages, Nurse Jackie, The Kindergarten Teacher, and The Cobbler. He was commissioned by the Library of Congress to write and perform his second solo show, An American Soldier's Journey Home, which commemorates the ending of the first World War. Taurel recently finished writing, producing, and directing the Web TV series Landing Home that tells the story of a veteran having a hard time adjusting out of the military. Taurel is also the recurring voice in the video game Red Redemption.

A free pre-show reception will be held from 6:00 to 7:15 p.m. in the Bisignano Art Gallery in conjunction with "The Flying Eye: Recent Work by Robert C. V. Lieberman." The exhibit will run through Friday, Nov. 19, 2021.

The American Soldier Solo Show is one of numerous events included in UD's new Captain Robert L. Martin Black Heritage Tribute. Support for this presentation is provided by the City of Dubuque Arts and Culture Special Projects grant program. Broadcast media support for this event is provided exclusively by Radio Dubuque and its four affiliate stations.

Tickets for The American Soldier Solo Show can be purchased from 10:00 a.m. to 5:00 p.m. Monday through Friday and 90 minutes prior to events at the Farber Box Office, Heritage Center, University of Dubuque, 2255 Bennett Street; by phone at 563.585.SHOW; or online at www.dbq.edu/heritagecenter.