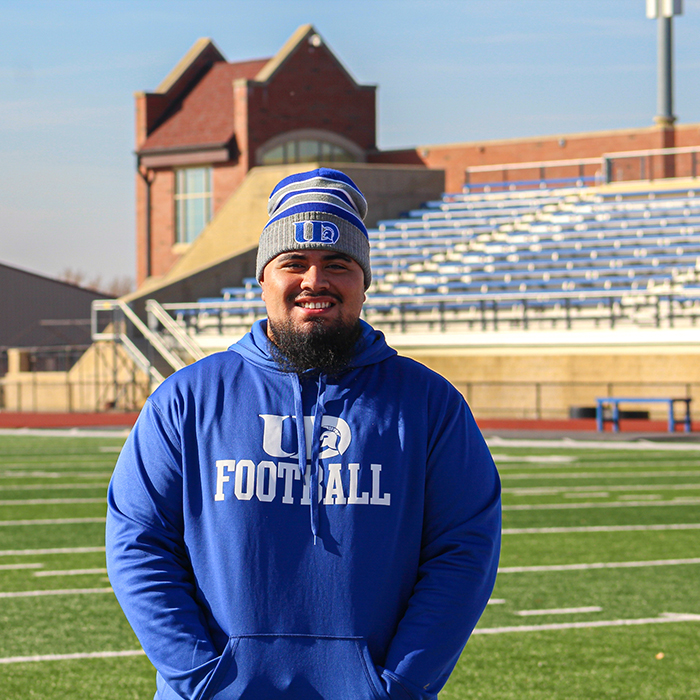 Trea Samifua, of Nanakuli, Hawaii, is a senior wellness and exercise science major. His position is defensive line on the football team.

What inspired you to play collegiate football?

"My uncle Levi Jr. Esene inspired me to play collegiate football. He played for San Diego State and then went on to play for the San Diego Chargers. As a kid, I always looked up to him and wanted to be just like him and play football. Every time I put those pads on and play football, I always think about him. Rest in peace."

What has been the highlight of your football career at UD so far?

"The highlight of my football career at UD so far would have to be me sacking the QB for Loras and beating them last year. But also, just going out there and playing with all my brothers."

Can you describe the team's mentality heading into the Key City Clash game against Loras College on Saturday, November 5, 2022?

"Our team mentality heading into the Key City Clash game is just playing 'our' game and playing fast and giving it all we got. This game means a lot to us especially the older guys, because we want that key to stay at UD forever."

What have you learned from being a member of the football team?

"I honestly learned a lot of life lessons from being a member of the football team. My Head Coach Z has been a great mentor to me and taught me a lot since I've been on his team, and I appreciate him for that."

What advice did a teammate give you and what advice have you given a younger teammate to pay it forward?

"Advice that a former teammate gave me when I first got here was just to be myself and work hard at whatever you do in life. Advice that I have given a younger teammate was to always accept help if you need it, because when I first got to UD I was kind of shy to accept help. But I'm blessed to have been able to meet some great people here at UD that helped me become a successful student-athlete."