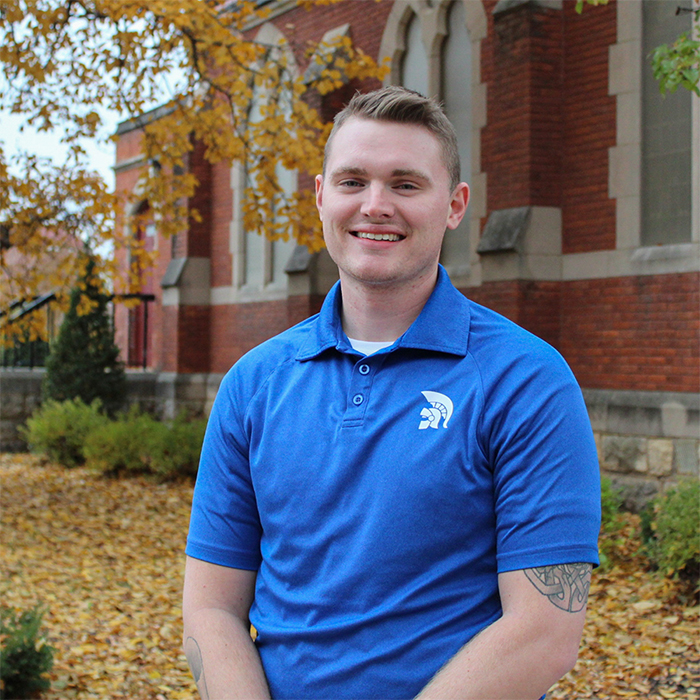 Erik Odegard, of Dubuque, Iowa, is a junior accounting major. He is one of over 140 student veterans and military-affiliated students at UD. Erik enlisted in the Army during high school and, upon receiving the infantryman designation, returned to Alpha Company 1-133 Infantry Regiment where he earned his Air Assault badge. He was awarded the Army Achievement medal, Global War on Terrorism Expeditionary medal, and Armed Forces Reserves medal.

What motivated you to enlist in the Army?

"I always knew I wanted to serve in some capacity when I was growing up, and I was talking to many different recruiters. I grew up watching the wars in the Middle East unfold and the many brave service men and woman who volunteered and answered the call, and I wanted to do the same. I was a junior in high school and was going to discuss signing some papers with the Marine Corps when a recruiter for the Iowa National Guard came to the school. The Army seemed like a better fit than the Marine Corps, so I signed papers shortly after. I liked the idea that I would be able to serve my local community and my country."

While at UD, your education was paused when you were deployed with Alpha Company 1-133 Infantry Regiment as part of Operation Spartan Shield in the Middle East. How did the Sergeant Jeffrey B. Dodge Veterans Center help you with the transition back to campus?

"The Sergeant Jeffrey B. Dodge Veterans Center was a vital tool in a smooth transition back. I knew I could pop in at any time and speak with Director Rick Ernst with questions. He helped me gain full advantage of the educational benefits I was able to use and helped me understand the confusing world of the VA. I frequently am down there utilizing the center to study and meet with other student veterans."

You received the Staff SGT Ronald R. Sagers Memorial Scholarship during Homecoming this year. Named after Ronald Sagers (C'68), who was killed in action on May 22, 1970, during the Vietnam War, the scholarship was created as a living memorial to honor Sagers' life and sacrifice. How did you feel when you learned you would receive this scholarship?

"I was completely honored to be the recipient of the scholarship, because it is men like SGT Sagers who I look up to. He made the ultimate sacrifice for his country and that is a debt that cannot be repaid. The fact that I was chosen to receive a scholarship in his name means more than words can describe."

What does Veterans Day mean to you?

What advice do you have for other students who are veterans?

"My advice to other students who are veterans would be to use all of the benefits that you have earned and have access to and know that we are all there for each other even if we do not necessarily know each other."