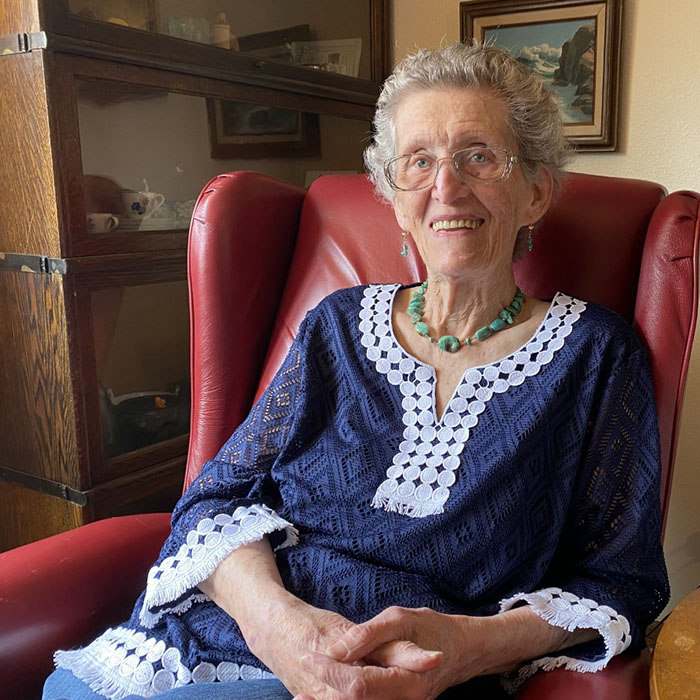 DUBUQUE, Iowa - As the University of Dubuque prepares to celebrate the academic accomplishments of around 400 undergraduate, graduate, and seminary students at two commencement ceremonies on Saturday, April 30, 2022, we are honored to share some of their stories.

"I decided I would rather be a wife and a mother and did a good job on both counts," she said.

Her children grew up and her husband passed away. Then, on Feb. 26, 2017, Eleanor's path in life took an unexpected turn back towards seminary

"I'm just puttering around in the kitchen. I heard a voice and it said, 'Go to seminary.' I thought, 'What? Who? Me? Now?' It was the Sunday before Ash Wednesday that year and I said to myself, 'If this is from the Lord, it will be confirmed Ash Wednesday.' I thought it could have just been my imagination kicking in. Because of circumstances, I went to two Ash Wednesday services. About halfway through the second one this deep peace settled over me and I thought, 'I am supposed to go to seminary. Okay.' The next morning I started making phone calls, getting on the internet, and talking to people about where to go and what to do. By the first of June, I was registered at Dubuque," Eleanor said.

At the age of 87, Eleanor will graduate with a master of arts in Christian leadership at the University of Dubuque Theological Seminary Commencement. The ceremony will be held at 9:30 a.m. April 30 in John and Alice Butler Hall, Heritage Center. For those unable to attend in person, it will be streamed live at www.facebook.com/DubuqueSeminary and www.youtube.com/DubuqueSeminary.

Eleanor, whose hometown is North East, Pennsylvania, but lives in Redfield, South Dakota, learned about UDTS from an associate pastor who attended the seminary.

"When I was talking about going to seminary, she said, 'Of course you'll go to Dubuque.' And I said, 'Oh, of course,'" Eleanor said.

She felt comfortable attending UDTS since it has offered distance education for over 20 years. Eleanor also appreciated the chance to meet faculty and other students on campus during the seminary's August Residency, which is a two-week retreat of classes, chapel, and team building exercises.

"I just feel in love with the whole place," Eleanor said, adding. "Both faculty and my classmates affirmed me again and again that, 'You're doing what God has called you to do. We know you're in the right place.' Because I would say, 'Why am I doing this?' And they would say, 'Just keep doing it because God will direct your footsteps.'"

She looked to God for help during her journey at UDTS when she was battling an illness for almost two years. Eleanor said she feels better now but still has brain fog.

"To be able to continue is a mark that God has carried me through this. I am now physically back to where I was before I got sick. My brain works most of the time, but there are times when I go to write a sentence, and I go back and read it again, and there's all kinds of little mistakes. I used the wrong word or the sentence is put together inside out and upside down. That's the brain fog," she said.

When asked what it has been like to attend UDTS at 87-years-old, Eleanor laughed and said, "That's the bestest part of the adventure!"

Throughout it all have been her four children and nine grandchildren who have cheered for Eleanor. She's not sure what the next stop on her adventure will be, but she knows who will be with her.

"The fact that I am in good health at this point and will be for the foreseeable future, I know God has carried me through and I get the impression that he says, 'Now you don't need to be carried anymore. You can walk beside me and I will hold your hand.' So that's what I'm operating on right now is I will walk beside Him and He will hold my hand and Him and me we're off on a new trip," Eleanor said, adding. "I'm glad He knows the road because I don't."