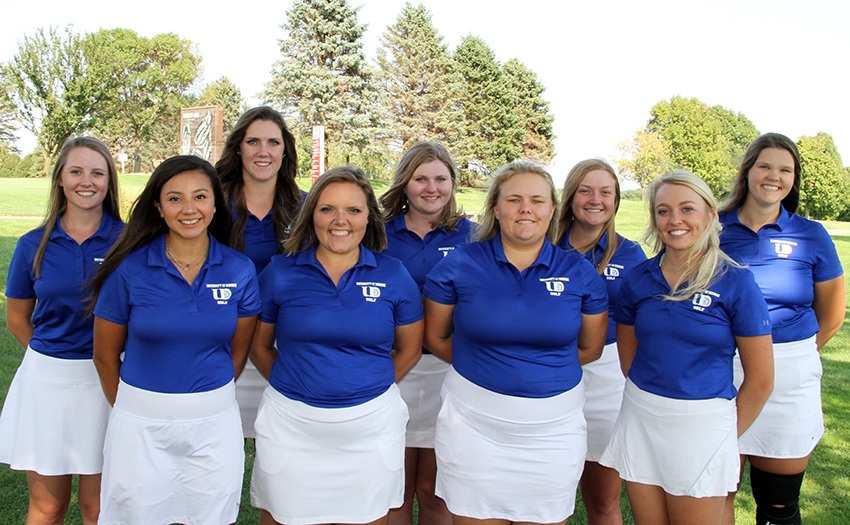 Ames, Iowa  -  The University of Dubuque women's golf team continues to lead after 36 holes of the 2019 American Rivers Conference Women's Golf Championship. The Spartans' who led by seven strokes after round one, has been lowered to just four strokes over second-place Luther, 665-669. Wartburg got itself back into Monday's final wave of tee times by rising from fourth place to third place (678). The tournament finishes at Ames Golf and Country Club tomorrow with 10:00 a.m. split tee times. Teams one though six in the standings will go off hole number 1 with teams 7-9 off hole number 10.

Luther's Morgan Kranz took over the medalist lead with a 75 today. She shot 80 yesterday for a two-day total of 155. Luther's Kelly Schultz and Dubuque's Madison Bowers both shot up three spots on the leaderboard to a tie for second place. Schultz was 2-under-par after nine holes and finished with a 76. Bowers also shot 76. Both women have two-round totals of 159, four shots behind Kranz.

Dubuque's Daniela Miranda duplicated her 80 from yesterday and stands alone in fourth place. Central's Emily Opsal is three shots behind Miranda after shooting an 87 today (76-87=163). Simpson's Hannah Gordon is in sixth place with a total of 167 (85 today). There's a tie for seventh place between Luther's Sydney Maule and Wartburg's Katie Choate; both have two-day totals of 168. Buena Vista's Makaylee Tenhoeve is in ninth place, just one shot behind Maule and Choate. There is a five-way tie for 10th place heading into the final round. The top-10 finishers earn medals as all-conference performers.