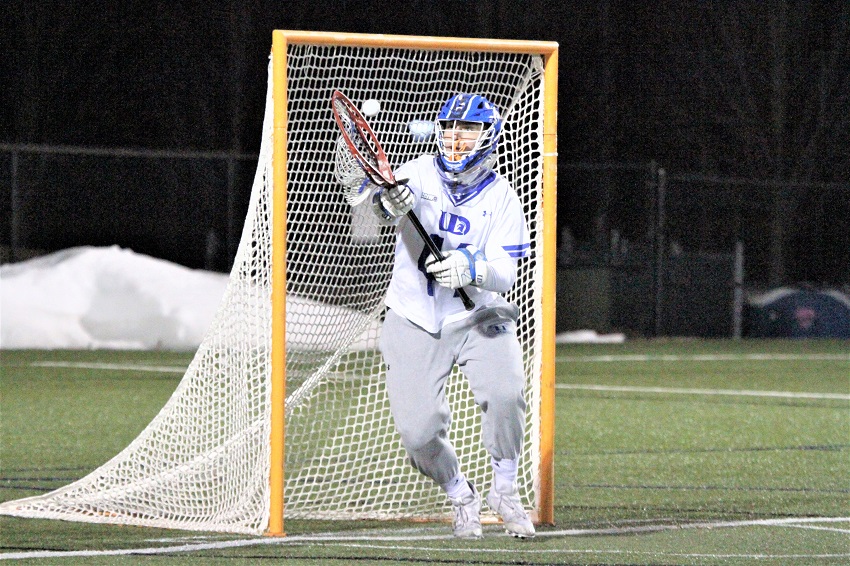 DUBUQUE, Iowa – The University of Dubuque men’s lacrosse team handed Monmouth their first loss of the season with a 10-9 thrilling win in double overtime.

It took less than a minute for the Spartans to strike first, as Dominic Mulcahy found the back of the net 51 seconds into the game for the early 1-0 UD lead. The Spartans would have their chances to extend the lead as they outshot the Fighting Scots 14-4 in the first but could only manage that one goal.

The score remained 1-0 in favor of UD until late in the second quarter when Gavin Hughes scored the second goal of the game to make it 2-0. Hughes goal began a flurry for the Spartans, as Andrew Wagner and Ben Farraday would be get goals over the next two minutes to make it 4-0. Monmouth got one of the goals back with 90 seconds to play before halftime, but UD had answered right back with Gavin Hughes’ second goal of the half to put UD ahead 5-1 after the first 30 minutes of action.

That momentum carried through halftime for the Spartans as they burst out of the gates in the third quarter with two goals in the first 2:25 to push their lead to 7-1. However, the Fighting Scots would not go away, scoring three of the final four goals of the third period to pull within four at the end of three.

The Spartans could not find a way to slow Monmouth in the fourth and the Fighting Scots tied the game at 9-9 with 1:42 left in regulation, sending the game into overtime. After a scoreless first overtime, Hughes, from behind the net, found Ben Farraday at the top of the key, who fired it past the Monmouth goalkeeper for the game-winner in the second overtime.

Four different Spartans scored multiple goals, led by the freshman Farraday with three on five shots. Tanner Weis, Hughes and Wagner all had two of their own. Nikolas Wortman controlled the faceoff circle for the Spartans, winning 17-23, while also scooping up nine ground balls.

The Spartans are right back at home on Thursday night, hosting University of Northwestern St. Paul at 7 p.m.