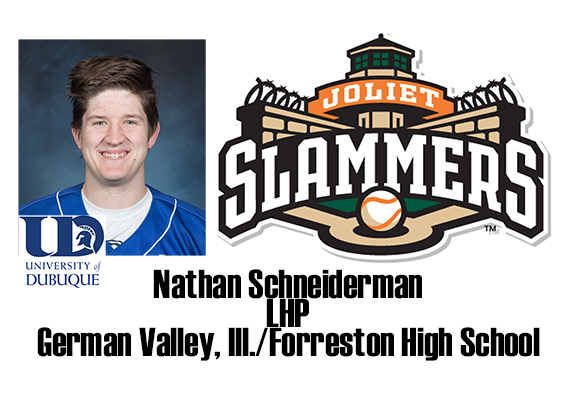 JOLIET, Ill. - The University of Dubuque's Nathan Schneiderman recently joined the Joliet Slammers of the professional, independent Frontier League as a pitcher. The four-time letterwinner,  three-time All-Conference performer, and current record holder for UD in saves in a career for the Spartans, stepped into familar territory on Sunday, August 4 to do the same for the Slammers. The Slammers were up 8-2 heading into the top of the ninth with one out when they brought in Schneiderman. He sat down the next two batters in order to secure the Slammers 8-2 victory over the Schaumburg Boomers at DuPage Medical Group Field in downtown Joliet, Ill. He is one of 13 pitchers currently on the roster and one of five, first-year rookies. The Frontier League is entering its 27th season of play in 2019.

The Slammers are tied for third place in the East Division with a 30-42 overall record and have won three in a row.