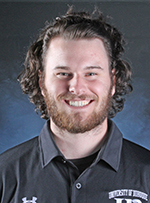 The senior from Anchorage, Alaska completed 20 of 23 passes on his way to a career-high passing performance of 349 yards. Duffy threw for three of UD's 10 touchdowns on the day, with the longest being a 54 yarder with the help of Elliot Pipkin. The Spartans were a perfect 5-5 in red zone opportunities, with all the scores being touchdowns, two of which came from the arm of Duffy with two touchdown completions of nine yards.

Duffy spread the wealth around against the Norse, connecting with six different pass catachers, with four of those having at least three catches and over 30 yards receiving. He averaged an impressive 17.3 yards per completion, while avoiding pressure for most of the day as he was not sacked once.

As an offense, the Spartans put up 740 total yards, setting the school record for yards in a game which was previously 735 in a win over Bethel in 2016.

The Spartans are idle this week before closing out the home portion of the schedule on Nov. 9th against Buena Vista.