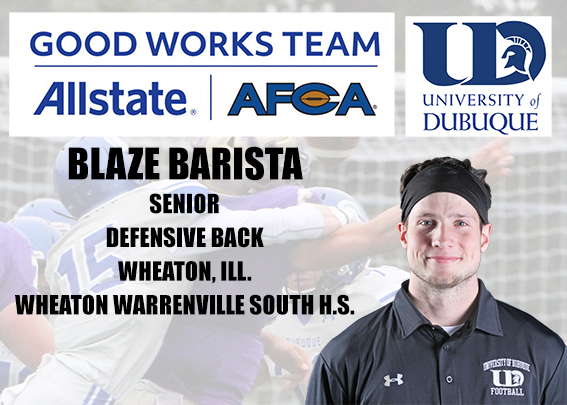 NORTHBROOK, Ill., July 16, 2019 – Allstate and the American Football Coaches Association (AFCA) today announced the list of nominees for the 2019 Allstate AFCA Good Works Team®, an annual award given to college football players for the impact they make off the field. A total of 137 student-athletes with inspiring stories of community service were nominated by their respective sports information directors.

The University of Dubuque's Blaze Barista (DB, 6-2, 174lbs., Sr., Wheaton, Ill./Wheaton warrenville South H.S.) was named to the nominee list. Barista has volunteered for youth football camps in his hometown and at UD, led a group of student-athletes in the Dubuque Days of Caring at local YMCA, and helped organize the athletic department's city of Dubuque Park Clean-A-Thon for the members of the football team.

Established in 1992, the Allstate AFCA Good Works Team® continues to be one of the most coveted community service awards in college football. From the 137 nominees, the final roster of 23 award recipients will be announced in September, bringing together 11 players from the NCAA Football Bowl Subdivision;11 players from the NCAA Football Championship Subdivision, Divisions II, III and the National Association of Intercollegiate Athletics (NAIA); and one honorary head coach. To be considered for a spot on the Allstate AFCA Good Works Team®, each player must be actively involved with a charitable organization or service group while maintaining a strong academic standing.

“It’s truly inspiring to see these young men dedicating their time and energy outside of their already busy schedules to leave a lasting impact in their communities,” said John O’Donnell, Allstate’s Western Territory president and member of the Allstate AFCA Good Works Team selection committee “As a longtime college football sponsor, Allstate takes great pride in our partnership with the AFCA, and we are honored to celebrate the successes of these players and highlight their stories as an inspiration to all who love the sport.”

This year’s list of nominees includes a heroic player advocating to break the stigma around mental illness through open athlete forums, a young man mentoring underprivileged kids to help change the trajectory of their lives, multiple players donating bone marrow and plasma to extend the lives of complete strangers and a tight end who visits the children’s hospital every week to spread hope to young patients.

"To be named to the Allstate AFCA Good Works Team is no small feat and goes above and beyond sportsmanship and leadership in the classroom or on the field," said Tim Tebow, two-time national champion, Heisman Trophy winner and 2009 Allstate AFCA Good Works Team® member. “These student-athletes believe in the power of giving back and enriching the lives of others, while also helping to shape the lives of future young athletes. Each year, I am struck by the caliber of these nominees and humbled to be a part of telling their stories."

The final 22-member team and honorary coach is selected by a voting panel consisting of former Allstate AFCA Good Works Team® members and prominent media members who look for both their dedication to giving back and the embodiment of true leadership on and off the football field.

After the final team members are announced on September 12, 2019, fans can vote for this year’s Allstate AFCA Good Works Team® captain through the official page on ESPN.com. Fans are also encouraged to join in the conversation by searching and using #GoodWorksTeam on their social media channels throughout the season.

“For 12 straight years, the AFCA has been proud to partner with Allstate to honor football student-athletes who volunteer their time and energy to give back to their local communities and other countries around the world,” AFCA Executive Director Todd Berry said. “These 137 nominees are examples to not only their fellow student-athletes, but to everyone in this great nation that selfless acts of giving back will enrich the lives of people they know, and don’t know, who benefit from their generosity.”

The Allstate AFCA Good Works Team® was established in 1992 by the College Football Association, recognizing the extra efforts made by college football players and student support staff off the field.  AFCA became the governing body of the award in 1997 and continues to honor college football players who go the extra mile for those in need.  Allstate worked to present the award starting with the 2008 season.

The AFCA was founded in 1922 and currently has more than 11,000 members around the world ranging from the high school level to the professional ranks. According to its constitution, the AFCA was formed, in part, to “maintain the highest possible standards in football and in the coaching profession” and to “provide a forum for the discussion and study of all matters pertaining to football.”