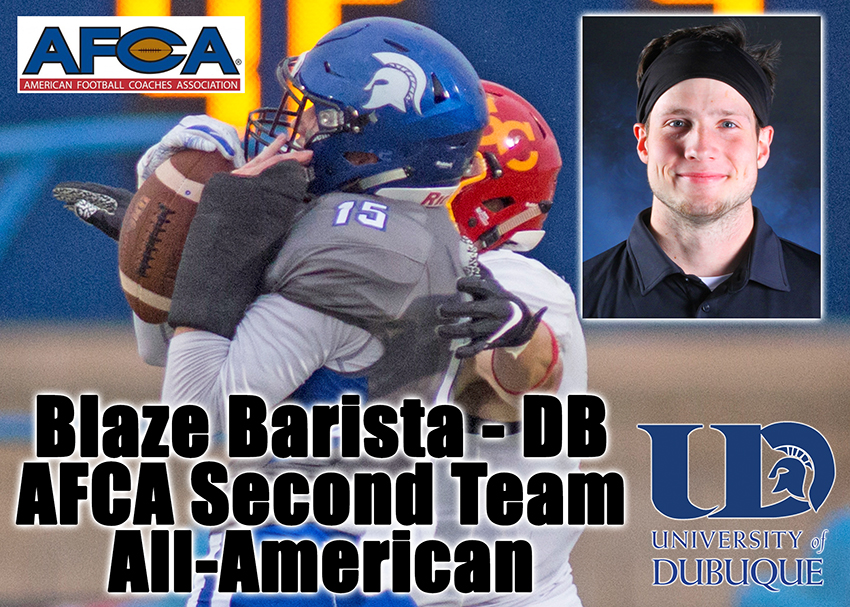 The AFCA has selected an All-America team since 1945 and currently selects teams in all five of its divisions. What makes these teams so special is that they are the only ones chosen exclusively by the men who know the players the best — the coaches themselves. The AFCA’s Division III All-America Selection Committee is made up of head coaches representing each conference from each of the AFCA’s eight districts, one of whom serves as a district chairman, along with another head coach who serves as the chairman of the selection committee. The coaches in each district are responsible for ranking the top players in their respective districts prior to a conference call between the district chairmen and the committee chairman on which the team is chosen.

Barista was also one of the eight All-American Rivers Conference selections for the Spartans. He earned second team all-conference honors as a junior in 2018, and capped his career with first team honors for his play in his senior campaign. In 2019, Barista topped the chart for the most passes defended in the conference with 21, three of which were interceptions. His three interceptions, were tied for the most on the team with Josh Strauss and Josh Ezekiel. In his 10 starts, Barista racked up 17 solo tackles and eight assists.

The Spartans ended the season on a six game winning streak to finish 7-3 overall and 6-2 in the American Rivers Conference to finish in third place. UD ranked #4 in the country in team passing efficiency defense with 92.59 and ranked 9th in passes intecepted with 18 in 2019.