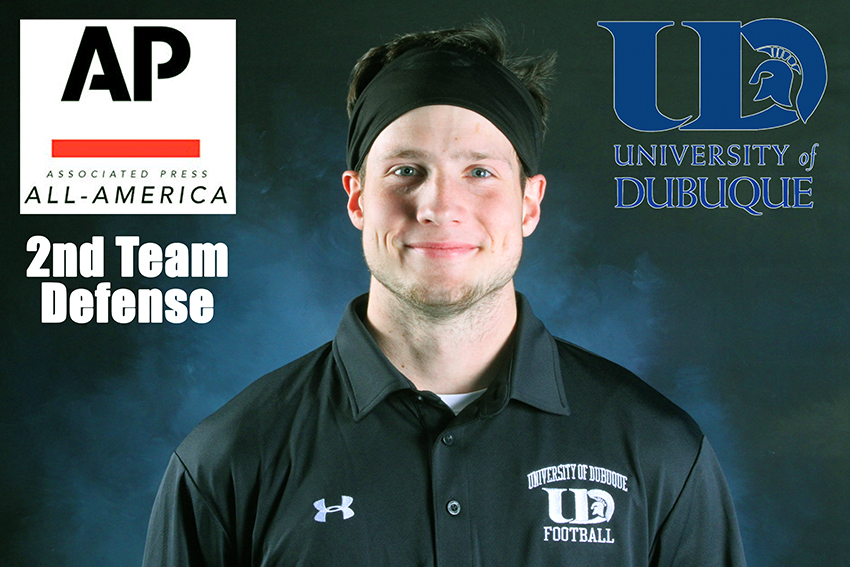 NEW YORK, N.Y. - The University of Dubuque's Blaze Barista (SR., DB, Wheaton, Ill./Wheaton-Warrenville South High School) has been named an AP All-America Second Team Defense honoree for the Spartans. Barista was named an 2019 AFCA Division III Coaches’ All-America Team – Second Team (defensive back) on December 4. He was also an American Rivers Conference (A-R-C) First Team selection in 2019, after being an American Rivers Conference Second Team selection in 2018. He was one of two A-R-C student-athletes to earn AP honors in 2019.

In 2019, Barista topped the chart in Division III NCAA statistics by ranking second in the nation for the most passes defended and led in the conference with 21 (2.1 per game), three of which were interceptions. He played most of the season with a cast on his left arm, and his three interceptions were tied for the most on the team with Josh Strauss and Josh Ezekiel. In his 10 starts, Barista racked up 17 solo tackles and eight assists and blocked two kicks (ranks 28th nationally). He also ranked 10th in the nation in punt returns for a touchdown with one this season.

The Spartans ended the season on a six game winning streak to finish 7-3 overall and 6-2 in the American Rivers Conference to finish in third place. UD ranked #4 in the country in team passing efficiency defense with 92.59 and ranked 9th in passes intercepted with 18 in 2019, which was also the top in A-R-C play. UD scored 43 TD's, averaged 30.5 points a game, passed for 2,271 yards and rushed for 1,570 yards in 2019. Kordell Stillmunkes led the league in rushing 859 yards in 170 carries with nine TD's. UD's defense sacked opposing quarterbacks 25 times in 2019 for losses of 133 yards.