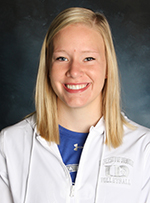 Andresen, a senior from Oxford Junction, Iowa earned CoSIDA Academic All-Region with a cumulative grade point average of 3.99, while majoring in human health science. On the court, she helped the Spartans to their second straight American Rivers Conference Tournament Championship and NCAA Tournament appearance. During her senior campaign, Andresen played in all 33 matches, accumlating 196 kills for 1.54 per set, with a hitting percentage of .200.

She was just one of three student-athletes from the American Rivers Conference to be selected as academic all-district. You can view the full list HERE