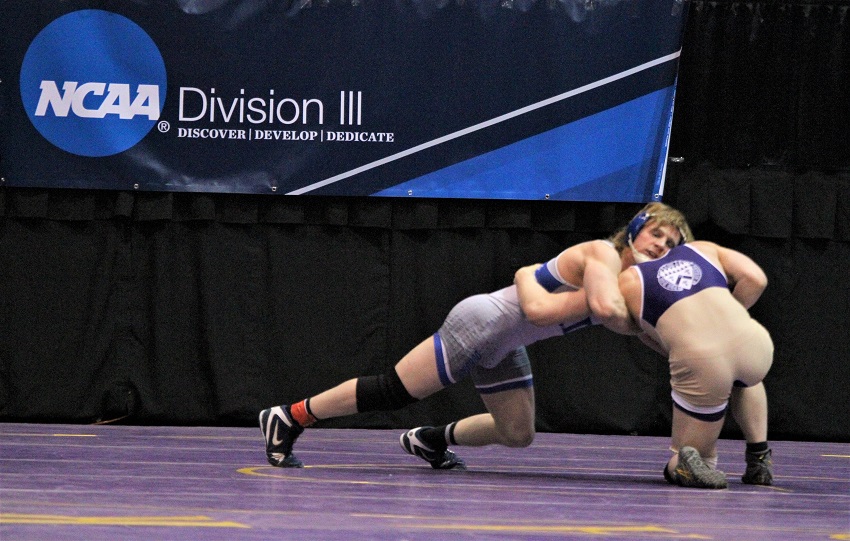 DUBUQUE, Iowa - Zarik Anderson earned the best finish of any UD wrestler at the NCAA Division III Lower Midwest Regional, earning a fourth place finish. The Spartans would also get a fifth place finish from Ethan Cain and two other place winners. However, no Spartan will be heading to the national championships.

Zarik Anderson was the first of the Spartans to take that mat in the consolation quarterfinals at 165. Anderson was taken down by North Central’s Jacob Boumans with just over a minute remaining in the first period, but Anderson quickly came up with a reversal before sticking Boumans in 2:03 to stay alive.

Ethan Cain followed the script of his teammate, getting taken down in the first period to fall behind early but Cain was able to turn the fortunes with a reversal just 30 seconds later, getting Central’s Gavin Babcock on his back for the fall to advance to the consolation semifinals at 197.

In the consolation semifinals, Anderson did not waste any time, jumping out to a 6-0 lead through the first period after a takedown and four points from a nearfall. Cornell’s Nic Jarvis chipped away to pull within 6-4 midway through the third period, but Anderson sealed the match with a takedown and two more back points in the final seconds to win 10-4 and advance to the third place match.

Cain fell behind early in his consolation semifinal, trailing 4-1 after one period, before he was pinned in the second to fall to the fifth place match.

Zarik Anderson's bid of a third place finish and trip to the NCAA Championships came up just short. Anderson negated an early takedown from Loras' Eddie Smith with a reversal of his own to even it at 2-2 midway through the first, but a quick escape gave Smith the 3-2 lead after one. Anderson would stay within striking distance, trailing 5-2 heading into the third and final period, but four nearfall points and another takedown for Smith was too much for Anderson to overcome as he would fall 12-3 and earn fourth place in the Lower Midwest Region.

Ethan Cain capped his career with a dominating performance. Cain took down Luther's Donovan Corn in 36 seconds and finished it off with a pin in 1:06 to secure fifth place.

In the seventh place matches, Bailey ended his season on a high note, pinning the Ozarks’ Ndayambaje John in just 1:13 to grab a spot on the podium. In the 184 match, Nielsen would fall by a 4-3 decision at the hands of Wartburg’s Isaiah Cox to finish the regional in eighth place.