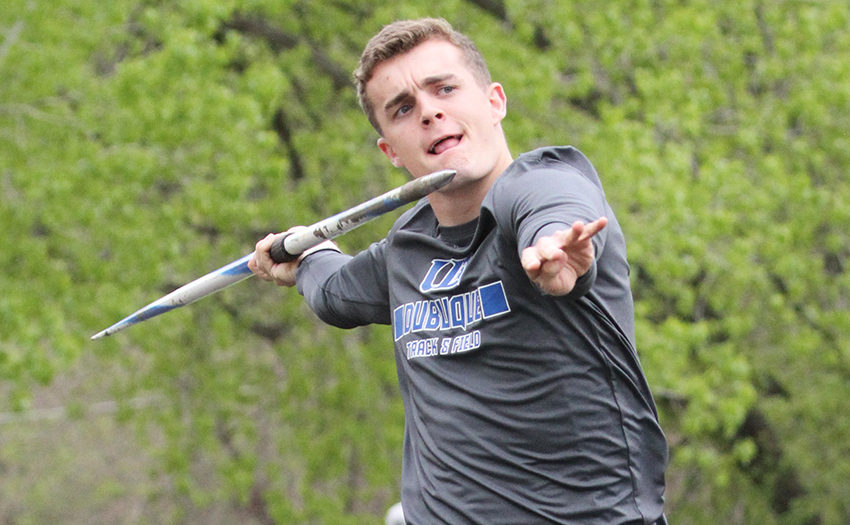 The University of Dubuque's Ty Chrisman (Fr., Lena, Ill./Lena-Winslow H.S.) edged out 22 other competitors on Thursday to claim the first 2019 A-R-C Outdoor Track and Field Champion for the Spartans in the men's javelin with a throw of 52.96m/173'-09" in his fourth throw of the afternoon.

CEDAR RAPIDS, Iowa - The University of Dubuque women's and men's track and field teams have been prepping all spring for the 2019 American Rivers Conference Outdoor Track and Field Championships on May 9-11 hosted by the Coe College Kohawks. After one day of competition and one completed event, the women's team sit in second place overall with 13 points and the men's team has 11 points and also finish day one in second place overall.

In men's javelin, it was all Chrisman who took the lead in the first throw of the finals and he held on despite a final throw by second place finisher Andrew Davis who's toss of 52.16m/171'-01" fell short. UD's Jaelen Boysen (FR., Clinton, Iowa/Clinton H.S.) would place eighth with a throw of 44.87m/147'-02" with his second attempt in the finals.

Competition continues on Friday, May 10 with decathalon/heptathlon.